TOP READS
Gurujam: An Engineer's: Through the sixth-floor office windows, I was
Tops Read
Terms of Use: These Terms and Conditions of Use, and the Participation, Privacy, Copyright and Transactions Policies and
×

It was the fall of 2002. I was at Talcher-Kaniha, Orissa and was working as a Control & Instrumentation (C&I) engineer at the 6X500 MW coal based super thermal power plant of NTPC. The day ahead was either a Sunday or some holiday. I clearly remember the quiet time that I had planned that evening and the day following with my family. Aroma of Mughlai chicken filled the house while I was busy playing with my three-year-old daughter. It was about half-past seven in the evening.

“Papa! Phooo..ne !!” giggled my daughter as the intercom rang – it was the shift in charge from the plant control room. “Both the High Pressure (HP) Bypass valves on the right-hand side of the boiler Unit #2 had opened on their own and were not closing in response to the close commands”. While the shift C&I engineer was carrying out the initial diagnosis, he informed that there was a sequence of alarms which preceded this – there was “HP Bypass Oil pressure low” alarm that came about half an hour back and the standby pump which started on interlock hadn’t stopped, and the “HP Bypass Hydraulic Power Unit Oil Level Low” alarm about fifteen minutes back which didn’t reset. While I was trying to further understand the situation, I could distinctly hear the distressed voice in the background of someone in the plant Public Address (PA) system – “There is a huge fire at HP Bypass 55 meters – Right-Hand side. Inform Fire brigade and arrange for fire fighting immediately.” 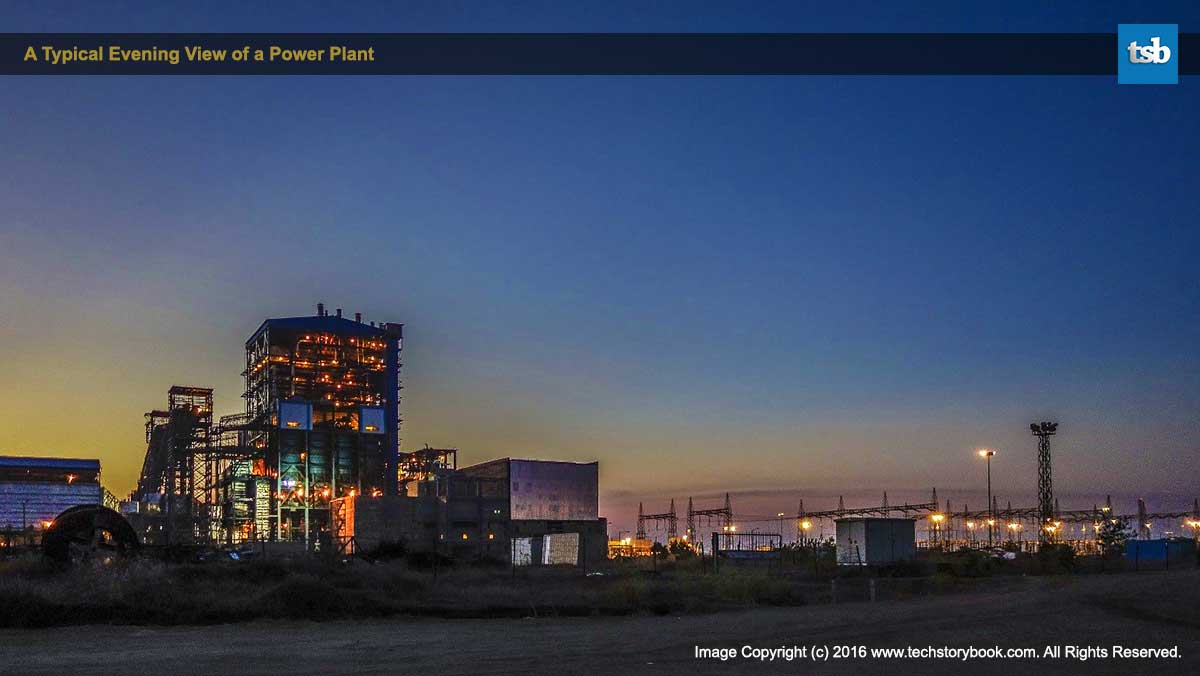 I should briefly elaborate on the plant configuration before moving further – the 2X500 MW units of NTPC Kaniha, Stage–I, were the first Once-through, Tower-type, Sub-critical boilers in India. Jointly executed by Stein Industrie, France, and BHEL, it had many peculiarities as compared to the conventional CE design boilers – having four HP Bypass valves (of 30% capacity each) – two on the right-hand side and the other two on the left-hand side of the boiler front at 55 meters. The hydraulic power pack was at 35 meters. It had a tank capacity of 350 liters.

Let me try to demystify HP-LP Bypass system a little. 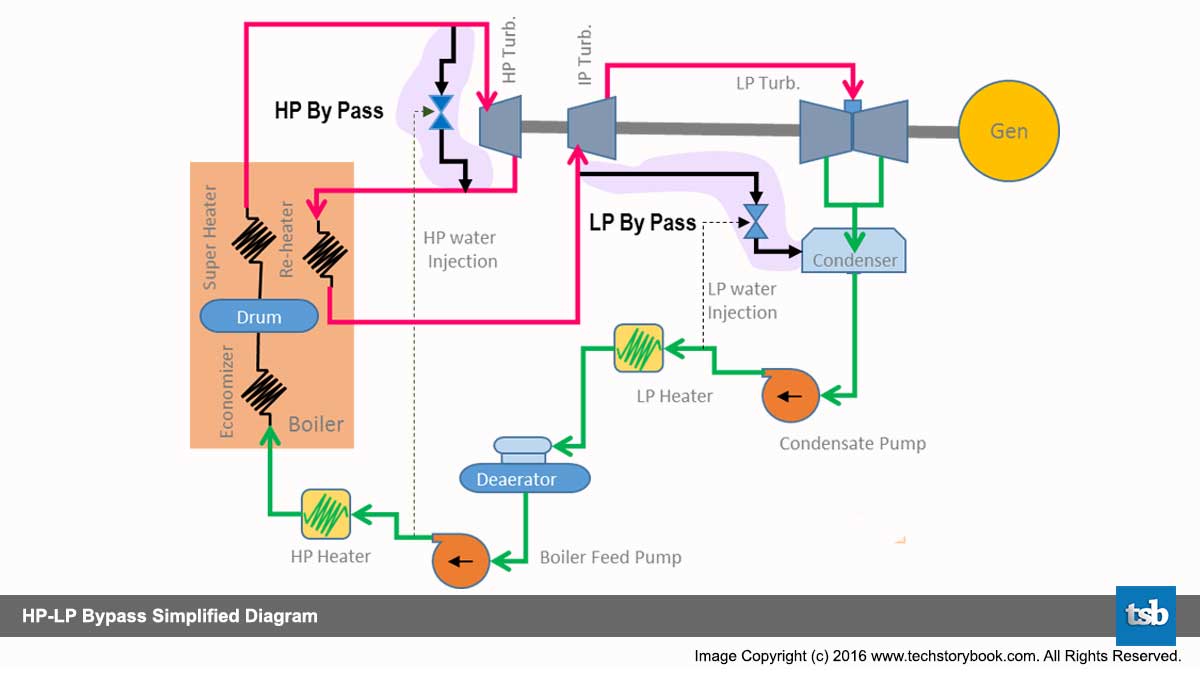 In a thermal power plant, coal is burnt in a boiler that generates steam. The steam turns a turbine that is coupled to a generator to generate electricity. Any time the turbine is tripped or stopped, either the boiler has to be shut down or a lot of steam has to be vented out to the atmosphere which would amount to a loss of a lot of heat energy and DM water. Also without sustained steam (and water) flow through the boiler, boiler components like re-heater can fail due to overheating. The HP-LP bypass takes care of these problems. During start-up and shutdown conditions, when the boiler is generating steam but the generated steam is not used for any purpose, the LP bypass system condenses the steam going to the LP turbine by spraying adequate amount of water on to it. Once the steam is condensed to water, the water is dumped into the condenser and recirculated back into the boiler and the cycle goes on. HP bypass system cools down the steam (by spraying water) and sends it directly to the re-heater to keep the re-heater cool. These systems have a large hydraulically operated valve with water injection system to cool or condense the steam. With that said let's go back to the story.

“Janmejaya, it seems there is a serious fire at 55 meters elevation of the boiler right-hand side - you need to rush! By the way what do you suggest – should we trip the boiler?” the apprehension in the voice of the shift in charge was apparent. “I would suggest you immediately reduce firing and maintain load at about 300 MW, if possible and take a call depending on the gravity of fire. I am on my way.”

The disappointment in the faces of my daughter and wife were palpable. “Don’t worry, I will be back in a couple of hours. We can still have dinner together.” I knew I was lying – the problem seemed too grave to be resolved immediately. The sequence of alarms preceding the fire indicated to a bad prognosis.

“Smoke is still coming out of the chimney, so they have decided to keep the unit running” I said to myself as I parked my bike in the parking in front of the Main Plant building. I could not see any fire at 55 meters and therefore decided to take the right-hand side boiler stairs to directly climb up to the HP Bypass area to gather a first-hand account of the situation. Cell phones were not there at that time and I thought it meaningless to enquire about the situation through the PA system. Water was dripping down the stairs and I saw the CISF fire personnel descending the stairs. “Has the fire been controlled?” I asked one of them while rushing up. “Yes” I could hear one of them, murmuring, from the back.

The scene was really bad – everything in and around the two valves had reduced to ashes. All the control equipment on the actuators – the servo, the blocking unit, and the Fast opening unit – had disappeared. All the cabling were charred. The whole area was flooded with water. The area was hot since all the insulation of the Main steam pipe on the upstream of the valves and the Cold Reheat (CRH) pipe on the downstream were burnt and the pipes were exposed. All those present in and around the valves were sweating so profusely that one could actually mop his brow with a towel! The HP Bypass oil unit tank was empty. There was no hydraulic pressure and all the valves (including the two on the left-hand side) had opened since they are (always) designed to open on the process pressure in the event of a hydraulic pressure failure. The valves and the actuators seemed to have survived the high-temperature fire that results from the burning of oil – the fire brigade had done a good job in controlling the fire.

Since the immediate task at hand was to make the valves operational, I instructed shifting two barrels of hydraulic oil to the oil station and two sets of control equipment (to be mounted on the actuators) to 55 meters. The junction boxes for both these valves were at 35 meters near the spray valves and were unscathed. I instructed my people to shift around 100 meters of multi-pair cables. While the materials were being arranged, I engaged in a detailed discussion with the shift engineers. The root cause of the fire was a very minor, drop-wise oil leakage from one of the hydraulic hose end connection of one of the right-hand side HP Bypass valves. It would have been harmless – but the oil was, unfortunately, dropping on an exposed piece of hot steam pipe, whose insulation was left exposed after carrying out some maintenance work. First, the loose glass wool strewn on the platform caught fire. One of the hydraulic hoses which happened run directly above this fire got burnt. The high-pressure oil started getting sprayed in all directions. This opening of connection resulted in hydraulic pressure going low and the standby pump started on interlock. Both the pumps kept on pumping oil till the tank became empty and the pumps tripped on tank level very low protection.

The project head could be seen darting across the open area near the spray control valves at boiler right-hand side, 60 meters. I knew it was going to be a long, painful night – “It is destined to be a tryst with HP Bypass valves rather than a candle light dinner!” I called up home to inform my wife.

It was wee hours next day morning by the time the job was completed. The oil station has been made operational, the control equipment on the actuators had been mounted and the bare minimum cabling to drive the valves from remote has been connected. I asked all my people to move back to a safe distance before attempting to close the valve from the local control knob of the servo unit. “Oh Yes, the valve is moving!”, I cried in joy as a momentary close command pushed the valve down a bit. Once I was satisfied with the local operation, the remote commands were also checked. We were all tired but the fact that unit was saved from a forced outage despite the major fire incident gave us a lot of satisfaction.

I could not wait any longer to head back home to catch up on the Mughlai chicken put in the refrigerator and my lost sleep. I didn’t mind having my dinner at breakfast!

More in this category:

« The Day Cowboys broke Coconuts John, You are Wrong ! »

What can Elevators and Escalators tell us about "Variance"

No place for another relay

All Well that Ends Well

Measuring up to a recruitment drive

Who is the Boss here ?

When Sholay came back to life

The Magic of Simple Ideas

The Story of Pumps

The Dilemma of Engineers

The Case of 2 IT Pros

The Magic of Simple Ideas

Who is the Boss here ?

When Sholay came back to life

Measuring up to a recruitment drive

The Story of Pumps

The Case of 2 IT Pros

The Dilemma of Engineers

The Fire that snatched away my Mughlai Chicken….Nearly!

All Well that Ends Well

Signals from the Moon !

John, You are Wrong !

No place for another relay

John, You are Wrong !

Signals from the Moon !

What can Elevators and Escalators tell us about "Variance"